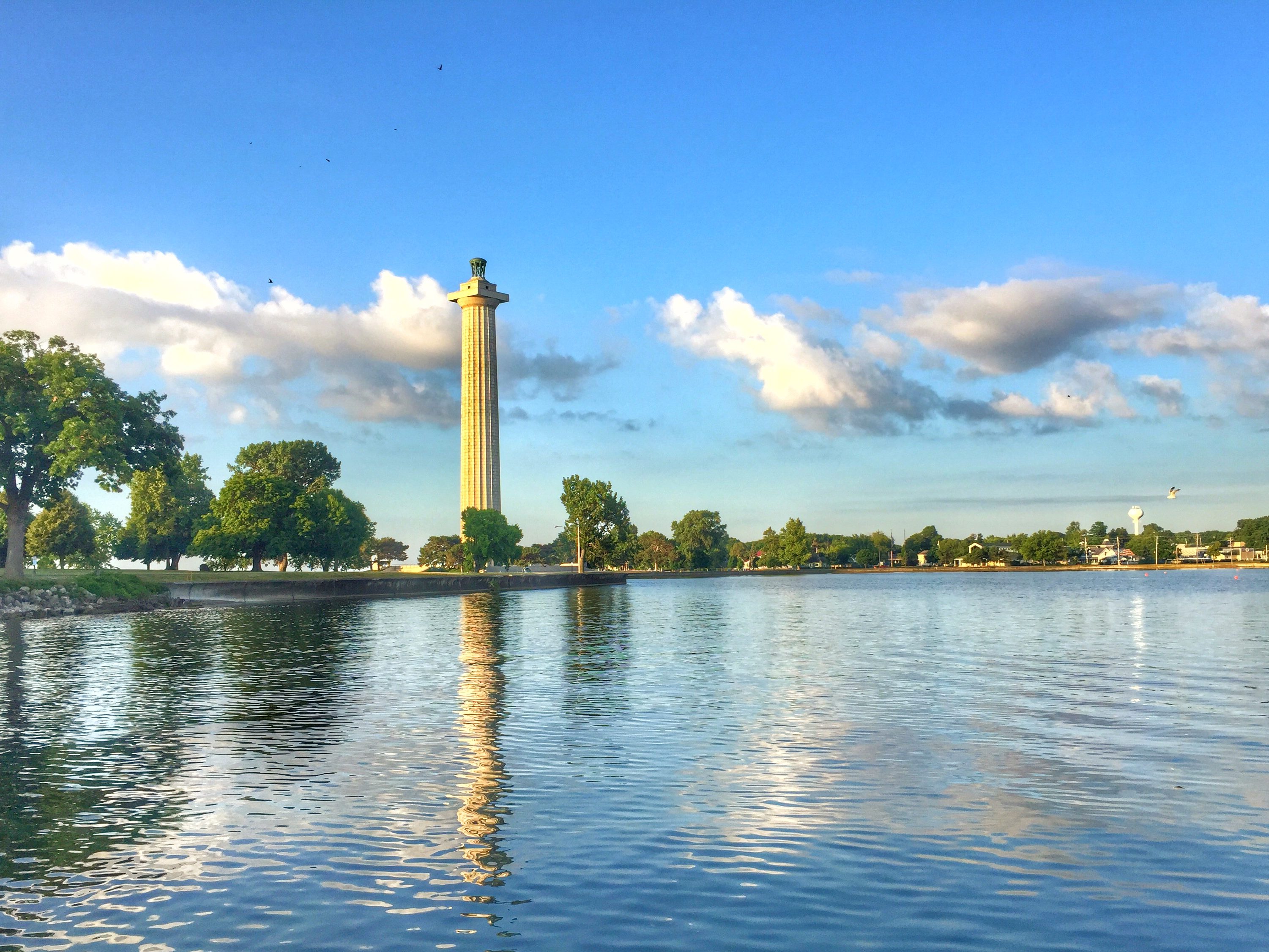 To get the latest Put-in-Bay news at your fingertips. 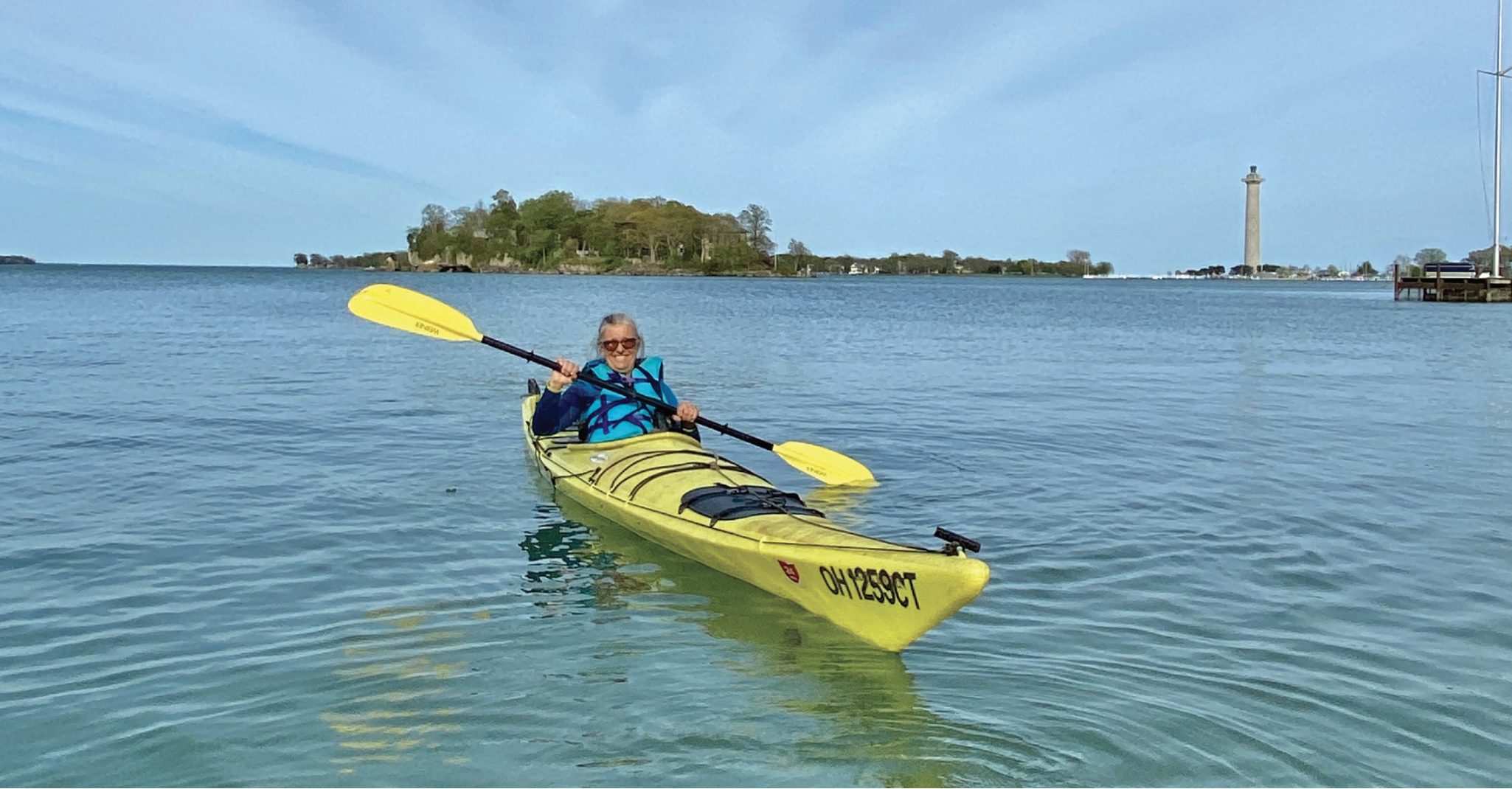 One of Put-in-Bay’s most avid kayakers is Lisa Brohl. She’s seen here kayaking along the West Shore with Gibraltar, Perry’s Monument and the tip of Peach Point in the background. -Photo by Susan Byrnes

One of the very popular things to do around the Lake Erie Islands is kayaking. Beginning Friday, June 11th, through Sunday, June 13th, the South Bass Island Kayak Rendezvous will take place on South Bass Island. More than 100 kayakers from every point of the compass will come to Put-in-Bay to enjoy some of the very best paddling opportunities there are. If you’re lucky, you might get a chance to see some very colorful kayaks owned by some serious kayakers.

Kayaking is especially great this time of year. A bathing suit, life jacket and a little sunscreen are all you need to enjoy a summer day on the water. A splash of H20 from the lake can be most refreshing to say the least.

Put-in-Bay has two kayak rentals. One is Kayak the Bay at Oak Point in the downtown harbor, and the other is Put-in-Bay Watercraft on the other side of the island at the South Bass Island State Park.

Kayak the Bay is located west of the Village just before you get to Oak Point on Squaw Harbor. Vicky Wigle has been renting kayaks to singles, couples, families and groups at Put-in-Bay for 20 years. She offers season passes, and sunset and guided tours when guides are available. Rates are reasonable. The first hour costs $25, and the second hour is free.

Put-in-Bay Watercraft has both one and two-passenger kayaks, plus both sit-in and sit-on-top kayaks. Owner Bob Gatewood tells us he has GPS on his kayaks so if you get lost, you can easily be found. Bob’s rental on PIB is the first stop on the Lake Erie Islands Water Trail, plus he also has a rental at the state park beach on Kelleys Island. One-person kayaks are $22 an hour, tax included.

Many islanders and cottage owners own kayaks. Some people use them a lot. Ferry boat captain Glenn Cooper and Jackie Taylor enjoy taking their kayaks on their boat to North Bass Island. They put them in the water and kayak around the island. They’ve even enjoyed kayaking up on Lake Superior. Nick Michael, owner of the Arbor Inn, has kayaked all the way to North Bass a couple of times.

If you are one of those who is apprehensive about taking out a kayak on big Lake Erie in the summer, here’s what longtime Put-in-Bay cottage owner Sheryl Patry wrote about kayaking, “This past year with so many restrictions and rules changing on a daily basis at work and even out of work left my mind exhausted and unsure on just about every decision in life. When I was out in the kayak, skimming along the surface of the water with the breeze in my hair, I felt free... free from masks, free to choose where to go and explore new places. Just going around slowly looking at the rock formations of Gibraltar felt invigorating, and empowering; I could go when I want, where I want. When the island noise gets to be too much, peace and tranquility is only 50 paddle strokes off shore. When I need a rest, I only need to kick my feet on top of the boat, lean back and look up to the sky, if I’m lucky I’ll see a few eagles circling overhead. This is why I love kayaking.”

If you still aren’t sold on trying kayaking, here are a few tales about the adventurous islanders who kayak all year round.

Susan Byrnes and her husband Mike own the Arbor Inn B&B on the island. Their teenage son asked for a kayak one Christmas a few years ago so he could take it out and go fishing. Mike bought one and Susan started going out in her son’s kayak with him. They got hooked, especially during the cold weather months of November, December, January, February and March. They are not alone. Their friends Russ and Lisa Brohl often join them. Russ, a retired lake freighter captain, loves being out on the water, and Lisa has been kayaking for more than 20 years.

Susan, who even bought a couple more kayaks for friends to use when they come to the island, says she’s on the water every month of the year....either on the family boat in summer and/or the their kayaks in winter. You’d think it would be just the opposite, but according to Susan, she loves the still, “heavy” water with no other boats around.

When asked about being freezing cold, Susan explained they wear survival suits and only go out when the wintery weather is fair. “We wouldn’t be out there if we were uncomfortable,” she says, but then mentions in the same breath about the kayaks icing up as they plied the frigid Lake Erie water.

Imagine yourself kayaking around the island of Put-in-Bay in cold weather. Susan has done it twice.

For those who like the convenience of suburban living, it will come as a surprise to most that Susan and Mike have kayaked to Middle Bass Island for a pizza from the General store in early April when the lake is still dangerously cold.

When Needle’s Eye, a natural rock arch on the north side of Gibraltar Island, collapsed, Susan and Mike were first to view it up close from the water. They notified Ohio State University, the owners of the island. On February 12th, there were also the last to see it before it collapsed. Susan even mentioned to Mike that he should kayak through the eye, but Mike said no and that he would do it the next time they were out. The next time they were out was March 8th, and Needle’s Eye was no more.

Mike and Susan aren’t the only winter kayakers. Put-in-Bay High School’s math teacher, Dan Kowalski, often goes out in the winter to fish from his red kayak. Nick Michael and Jason Cooper have been seen kayaking though slush and pancake ice. Barry Koehler has kayaked with his daughter Piper to Starve Island to check out the huge ice shoves. Just so you know, kayaks are not made for ice breaking.

One of the best things for kayakers who ply the waters around the Lake Erie Islands is the water trails guide. The creation of the guide came from the growing interest of kayaking and paddling sports. The Put-in-Bay Township Park District, along with their partners, the National Park Service Rivers, Trails and Conservation Assistance Program and Ohio Sea Grant released the brochure which features five circular paddling routes and associated public access points around South Bass, Middle Bass, North Bass, Kelleys Island, and the Catawba and Marblehead peninsula area.

Access points to the nearly 60 miles of paddling trails are visible from the water and marked with color coded signs that coordinate with the guide by island. Safety, environmental information, access amenities, and paddling distances are also included.

The free guides are available at the Lake Erie Shores and Islands Welcome Centers in Port Clinton and Sandusky, as well as the Lake Erie Island State Park Offices on South Bass, Middle Bass and Kelleys Islands and the Aquatic Visitors Center at Put-in-Bay. It is also available online at go.osu.edu/LEwatertrails.

NOTES: In putting this story together we leaned a few things:
1. Being in a kayak when midges are around is a memorable experience.
2. One island paddler ended up with a snapping turtle in his kayak when he was in Florida.
3. Lisa Brohl towed in a railroad tie off the lake with her kayak. A motorboat hitting one of those can be very dangerous and destructive.
4. Susan Byrnes was surprised by a fireworks show one time when she was paddling.
5. Roger Miller from Chapman Point has been known to blare loud John Denver music out onto the lake from his home when kayakers pass by.
6. The weather and lake conditions can change rapidly.
7. Michele Heineman enjoys kayaking.

Seen here enjoying a little winter kayaking are Mike and Susan Byrnes from the Arbor Inn. In the background behind the shove ice along the shoreline is the South Bass Island Lighthouse.

See More From The Current Issue

Check out the current issue of the Put-in-Bay Gazette online.